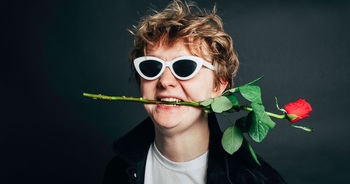 Lewis Capaldi is a Scottish soul singer, most famous for his signature ballad "Someone You Loved."

Capaldi was born in Glasgow, Scotland, and lived there till the age of four. He’s the youngest of four children, and deciding he wanted to pursue music from an early age, he wound up graduating from New College Lanarkshire, with an HND in Music. He was discovered by his manager, Ryan Walter, through recordings Capaldi uploaded from his phone to his Soundcloud account. Walter flew out to meet him the day after messaging him, and recorded a set Capaldi did in a bar with "like, two other people." The two got together periodically for writing sessions in London, while Capaldi was still in college at Glasgow.

Capaldi released the Bloom EP in October 2017, and his song "Bruises" made him the fastest ever unsigned artist to reach 25 million plays on Spotify. Signed to Universal, he released the Breach EP, which would feature the song that propelled him to superstardom, "Someone You Loved." It led to the release of his debut full-length, Divinely Uninspired To A Hellish Extent, in May of 2019.

“Someone You Loved” was not only a number 1 hit in the UK (for seven weeks), it also hit number 1 in America, Ireland, Canada and several other countries. He managed another number 1 hit in the UK and Ireland with his song “Before You Go,” which is dedicated to his aunt, who died by suicide when Capaldi was a child. In May of 2020, the early days of the COVID-19 Pandemic, Capaldi released his third EP, titled - get this - To Tell the Truth I Can't Believe We Got This Far. It’s made up of live renditions of songs from Divinely Uninspired To A Hellish Extent, plus a cover of “Shallow” from A Star Is Born.

In contrast to his incredibly somber blue-eyed soul music, Lewis Capaldi, who's generally seemed to be more nonplussed and amused by his superstardom than anything, is famous for being a fun-loving Everyman with a self-deprecating, goofy sense of humor, in his social media presence and his interviews. Even people who don’t particularly like his music tend to admit Lewis Capaldi himself seems like a fun guy when interviewed. To put his charm in perspective, this guy was once on The Graham Norton Show, and was the funniest person on a panel with Jim Carrey on it.

As a side note, Lewis Capaldi’s second cousin once-removed starred in one version of his “Someone You Loved” music video, and is himself an actor that maybe you might have heard of.