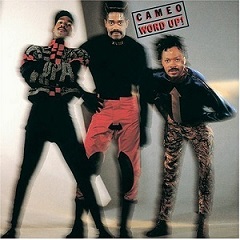 Not to be confused with The Cameo, Cameo are a Funk-Soul band from New York City. Led by Larry Blackmon, they started in 1974 as the New York City Players before changing their name to Cameo to avoid being confused with the Ohio Players. The group has gone through many lineup changes over the years, with Blackmon being the one constant. Among their most famous songs are "Word Up!," "Candy" and "She's Strange."

"Trope Up, up, everybody say, when you hear that call you've got to get it under way":