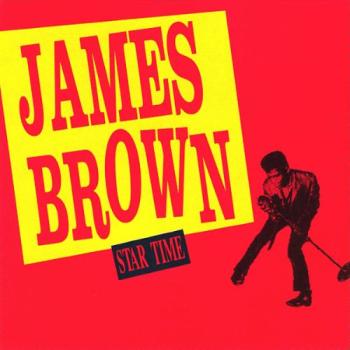 I first saw James Brown in 1962 at an outdoor theatre in San Diego and it was indescribable... it was like putting a finger in a light socket. He did the whole thing with the cape. He did "Please Please Please". It was such a spectacle. It had all the pageantry of the Catholic Church. It was really like seeing mass at St. Patrick's Cathedral on Christmas and you couldn't ignore the impact of it in your life. You'd been changed, your life is changed now. And everybody wanted to step down, step forward, take communion, take sacrament, they wanted to get close to the stage and be anointed with his sweat, his cold sweat.
Advertisement:
Tom Waits, explaining his choice for James Brown's "Star Time" as his 11th favorite album of all time in his personal Top 20, "The Guardian", March 20, 2005.

Star Time is a 1991 compilation by James Brown. Combining a Boxed Set with a Greatest Hits Album, the compilation consists of four CDs spanning most of his career, from his first hit record "Please Please Please" (1956) until "Unity" (1984). The informative liner notes by Cliff White, Harry Weinger, Nelson George, Alan Leeds and James Brown himself won a Grammy Award in 1991 for "Best Album Notes". Apart from that it offers an excellent overview of the scope and power of Brown's talent and is the most comprehensive collection of his recordings.

Disc Four: The Godfather of Soul

Papa's Got Some Brand New Tropes