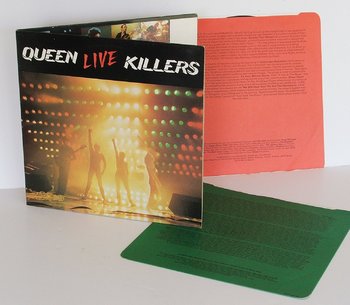 For many music fans, a live show is one of the best ways to listen to music. Playing a record is great, but it just can't compare to the roar of the crowd, the fantastic improvisations, the Audience Participation, the band saying things between songs, or the smell of certain illicit substances. But what do you do if the band you want to see live has broken up, or you can't afford to see them, or you live at the other side of the world, or the concert you want to see was a once-in-a-lifetime event that will never be repeated again? Well, you buy the live album, of course!

Live albums are pretty self-explanatory - they are recorded at a show, normally coming from the soundboard. Some live albums are recorded at just one concert, while others are recorded at several different concerts (sometimes spliced together to make them seem like they came from the same show). Sometimes the songs sound pretty close to how they are on the record, but with some artists, live versions can take on a completely different feel. (For example: the studio version of "Whipping Post" by The Allman Brothers Band is about five minutes long, a pretty standard length for a song from that era. The live version on At Fillmore East? 22 minutes!) Some artists like to spice up their live albums by rearranging the songs, such as playing them unplugged or adding a symphony orchestra.

The quality and importance of live albums varies greatly depending on the artist and genre of music. Many live albums are seen as inessential or just quick cash-ins for the record label. It may even be a Contractual Obligation Project, or in some cases a way for a band to quickly terminate a contract and move elsewhere. Even more if the artist just died and everybody is mourning him, the studios always have some spare unreleased live recordings to take advantage of the moment. But in other cases, especially in rock and jazz, they are seen as just important as their studio albums. Some huge touring bands, like The Grateful Dead and Pearl Jam have many more live albums than studio recordings! Often, classic artists like Bob Dylan and The Who will unearth live albums long after they were actually recorded and release them for fans. Another factor are the edits done after the recording: some artists may edit the songs so much that it basically turns into a standard studio album with crowd roars at the begining and end, while others may prefer to release it mostly untouched, so that it feels as close to the real experience as possible.

Many fans like to make bootlegs, unofficial live albums recorded at a show without the record company's permission. Artists have had varying opinions on this, with some hating bootlegs to the extent that they try to sue bootleggers and some encouraging bootleggers so much that they will have their own "official bootlegs" on their website for download. Some bands will occasionally take bootlegs and release them officially. Be warned before you give bootlegs a try - because they are not officially released, the sound quality usually varies.