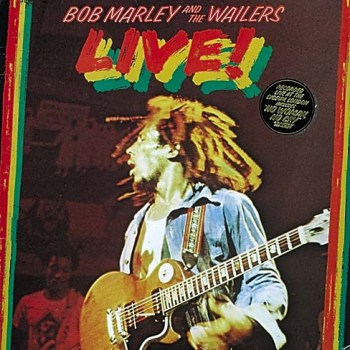 One good thing about music: when it hits you, feel no pain!
Advertisement:

Live! is a 1975 Live Album by Bob Marley and the Wailers. It's notable for being his first official concert album and one of the best in its genre. There's a magical, spiritual and moving atmosphere in many of Marley's live performances and this album captured it like no other. Even his other official live album released during Marley's lifetime, Babylon by Bus (1978), never reached the same legendary and superlative status as Live! did.

Live! was recorded in the Lyceum Theatre in London. This already showed how popular Reggae had become by his point and its success would only grow. Live! would become Marley's international breakthrough, driven by his Top 10 hit single "No Woman, No Cry". His Signature Song had already appeared earlier on Natty Dread (1974), but in an Early-Installment Weirdness studio version that pales in comparison to the much more epic and moving version here. Aside from tracks that had appeared on his Island albums, Marley threw in a treat for old fans with a new version of the old Wailers classic "Trenchtown Rock". Many fans hadn't heard the song at the time.

The remastered edition from 2001 also adds a live version of "Kinky Reggae" as a bonus track.