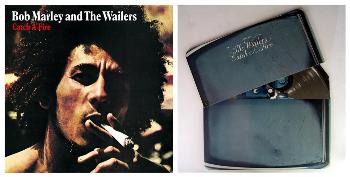 Catch a Fire is a 1973 album by Bob Marley And The Wailers. It was the first of their albums to be released by Chris Blackwell's Island Records and thus the first time a Jamaican reggae band was given ideal technical facilities to record their songs in excellent sound quality.

Together with the soundtrack of The Harder They Come, Catch a Fire is notable for bringing reggae to worldwide attention outside the Carribean. There had been succesful Jamaican music artists before in the 1950s and 1960s, but apart from Harry Belafonte and Jimmy Cliff they were always one-hit wonders that didn't chart that high in Western countries. "Stir It Up" was Marley's first hit song in Western charts. However, it would take until "No Woman No Cry" in the version of the Live Album Live! before Marley and reggae really broke through internationally.

Catch a Fire is considered to be one of the finest reggae albums in existence. In 2001 a Deluxe Edition was released with the unreleased, non-overdubbed Jamaican songs on the first disc and the original, overdubbed album on the second disc. Despite what many fans think, Marley always intended the songs to be overdubbed, but it provides an interesting alternative.