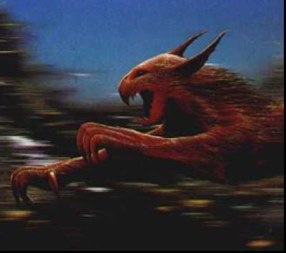 You know how, in comics and western animation, they indicate that something is moving really fast by showing it as just a blur, perhaps with contrails?

This is the recording of that phenomenon.

Interestingly, it gets used in live-action film, too. This usually requires special effects, as anything in Real Life that moves fast enough to be seen only as a blur is usually barely seen at all, and that usually isn't what the filmmakers are aiming for.

In the world of CGI, motion blurs have to be faked by a bewildering array of post-processing tricks — your game console effectively burns a lot of processing power adding back in the flaws filmmakers struggle to take out. It's not just cinema-envy, though. Blur does a lot of work ameliorating a low frame rate.

In animation, the effects of motion blur may be shown as either the moving object becoming stretched in the direction it moves (termed "smear") or the moving object being shown multiple times ("multiple"). Some CGI cartoons, especially of the zanier sort, may use a combination of smears, multiples and genuine motion blur. Ninjas who do this are often drawn to be blurry black dots.