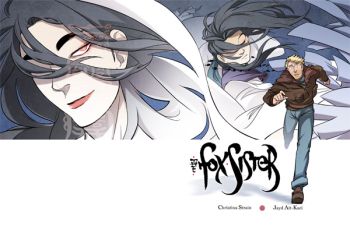 is a Webcomic written by Christina Strain and drawn by Jayd Aït-Kaci. It is described as a "supernatural thriller/dram-edy" by the creator. It is based on the Korean folk tale of the same name, about the shape-shifting nine-tailed fox Kumiho.

The comic is set in Seoul, Korea, of 1968. After having witnessed a Kumiho murdering her family as a child, Cho Yun Hee has grown up a bitter young woman. On her hunt for said Kumiho, who has taken the shape of her sister Sun Hee, she meets the American ex-soldier Alex.

The comic began in 2011, but stopped updating some time in 2014. In 2017 a news post said the final chapter had been written and an epilogue was in progress but there has been no further update. A backup of the comic can be found here

The Fox Sister contains examples of: