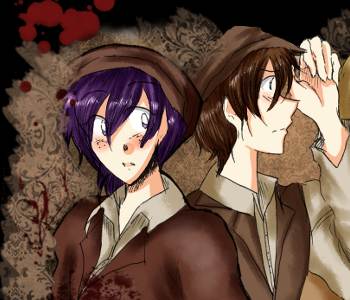 The heart of the Irregulars, Hatsune and Tom. They Fight Crime!! Mostly.
They won't fix me just yet....
— "Dear Boss Letter", Jack the Ripper (also the comic's tagline)
Advertisement:

(or The Midnight Train) details the life of Hatsune Rondo, an Ordinary High-School Student and Sherlock Holmes fangirl who is somewhat disenchanted with her surroundings in modern Japan—mainly due to her vacant, neglectful mother—and dreams of living in a romantic Victorian city. One evening, Hatsune is mysteriously whisked back in time to Victorian London of 1888 after missing the last train home and boarding another train that turned up at midnight.

There, Hatsune has a very brief run-in with Jack the Ripper only to be saved by a kindhearted orphan named Thomas Bellman. When Hatsune asks Tom for help, he introduces her to his boss, who happens to be none other than Sherlock Holmes himself, who offers Hatsune a temporary position in the Baker Street Irregulars until she finds her way home. Hatsune joins Tom and his two best friends, Jack Terry and Morris Redwood, in their quest to take down the many criminals that infest London, along the way going up against and eventually befriending the rich and haughty Jessica Queen. At first, Hatsune's dreams seem to have come true, living in a world she's always imagined with a group of close friends plus some good old fashioned justice on the side, but strange things from Hatsune's past begin to surface, particularly as she begins to fall in love with Tom, murders get more and more gruesome, and her brief encounter with the Ripper just doesn't seem to leave her alone.

The series is still ongoing. Currently, it's 14 volumes long.