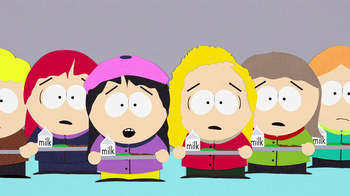 In Real Life, different people have different faces — barring identical twins or doppelgangers — but this does not always hold true when it comes to media. Sure, a child, teenager, and adult of both sexes will be visually distinct from each other (often solely by height), but beyond that... all bets are off.

Impossibly Cool Clothes, distinctive Hair Colors, and Signature Headgear can create an extremely powerful framing effect, meaning the rest of the character's design may be quite simple as a shortcut. The unfortunate result may be a fundamentally homogenized artstyle, exacerbated if the designs are simplified further for characters who must be easy to animate in large groups. Naturally this runs the risk of looking somewhat cheap, especially if the cast gets very large. This can be compensated with color redesigns, or sticking a character habitually into one outfit, because said outfit is more distinctive than the actual character. In contrast, homogeneous outfits (like school uniforms) tend to encourage faces to be drawn differently. Because of this, a character's outfit actually changing usually means its supposed to mark an emotional change in either them or how we're supposed to see them. A simple haircut can also mess up with who the character is very easily.

Anime and manga sometimes use a large amount of eye variation (employing all sorts of non-existent eye colors (red, purple, etc.), eye shapes (slanted inward, slanted outward, slit pupils, etc) and hair variation (with unrealistic (but natural) colors and styles that defy physics), along with other distinguishing features such as scars, tattoos, etc. rather than changing the overall shape of the face itself (anime and manga also stop short at skin colors, though, because taking too much liberty with them as with eye and hair colors could result in sickly or monstrous-looking characters). This results in various instances of Ambiguously Brown characters, where skin tone is the only clue for guessing the characters' ethnicity. Similarly, early western superheroes often look alike aside from their distinctive costumes, particularly those created prior to The Dark Age of Comic Books, where pretty much every superhero was a classically handsome white guy with varying hair colours and styles, with varying eye and face shapes usually used to specifically denote ethnicity, with people of the same ethnicity tending to look alike.

Faceless Masses takes this trope to the extreme. The opposite of Cast of Snowflakes, where even the most incidental characters' designs tend to be unique and well-defined. Sounds like but is unrelated to Same Face, Different Name, which is about creators going by different monikers. A clever creator can work around this and create a Reused Character Design habit. See also Generic Cuteness (every character has the same cutesy features), Only One Female Mold (all female characters have the same body type) and You All Look Familiar (the videogame version).