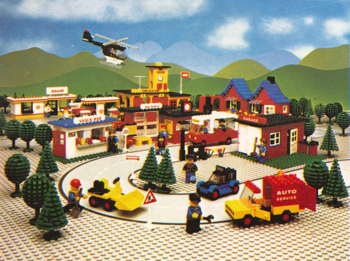 LEGO City (also known as LEGOLAND, LEGO Town, City Center, and World City over the years) is the longest-running LEGO theme of all. Houses and other town buildings have been shown as "building suggestions" on LEGO packages from the very first in 1949 and sets for specific buildings (as opposed to generic assortments of bricks) and "town plan" plastic boards began appearing by the mid-1950s.

The precursor to the modern LEGO City theme was LEGOLAND, which debuted in 1969. In 1974, a primitive version of the famous minifigures was introduced, with molded-on arms, one-piece leg parts and no faces printed on the heads. LEGO Town proper debuted in 1978 with the introduction of the modern minifigures, which now had separate legs and arms, and printed smiling faces on the heads.

After a period in 1997-98 which is commonly referred to as "Town Jr.", the theme was rebranded as City Center in 1999. City Center was discontinued in 2001, leading to a brief period with no proper Town sets outside of reissues of older sets until World City's debut in 2003. That incarnation was more action-oriented and focused on the emergency services (fire, police, coast guard) than the previous ones. World City itself was discontinued in favor of the now-current LEGO City theme in 2005.

Most non-Technic LEGO themes were and are based on (and more or less compatible with) Town/City.

Spun off into the Wii U game LEGO City Undercover and the Nickelodeon animated series LEGO City Adventures.