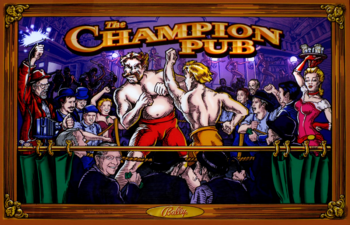 "Welcome to Champion Pub, kid!"
Established in 1864
Come on in & pound a few.
Advertisement:

The Champion Pub is a 1998 pinball machine made by Williams Electronics (under the Bally label).

It's centered around the concept of boxing matches held in bars - the player, as a newcomer named "The Kid", must work his way up through the circuit, training to get his health up, before eventually beating the final man, getting the Pub Champion belt, and fending off five more foes in "Ultimate Challenge".

The game's design departs from the norm - there are health meters for the player and his opponent, and there are a number of toys in the machine, the most prominent of which is a large, revolving target that can present either a heavy bag or a boxer figurine. Two others are a small speed bag with a pair of fists and a rotating metal bar styled as a jump rope; each of these is a separate Mini-Game that the player must complete in order to train for the fights, using the flipper buttons to knock the ball against the bag or make it hop over the turning rope.

The Champion Pub was formerly available for The Pinball Arcade before their license to it and all other Williams/Bally tables expired on July 1, 2018. Those who purchased it before then can still play it, however, and another digital version is currently available for Pinball FX3, along with a remastered version that includes the typical Zen Studios flair.