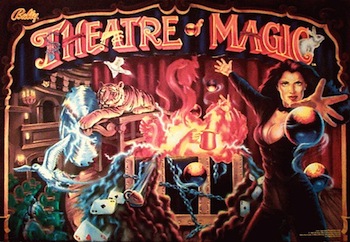 "You have the magic!"
Announcer: "The Theatre awaits!"
Advertisement:

Theatre of Magic is a Physical Pinball Table designed by John Popadiuk with art by Linda Doane. it was released by Williams Electronics under its Bally label in 1995, and went on to become the best-selling pinball machine of the year.

The game casts the player as an aspiring magician performing a show in the theatre. With the help of the spinning Magician's Trunk on the playfield, you must pull rabbits out of hats, escape from a strait jacket, saw assistants in half, instantly transform into various animals, and perform other illusions. Particularly skillful players can enter the basement and invoke Midnight Madness, but only a Master Magician will be able to perform the Grand Finale and leave the audience mesmerized.

Theatre of Magic remains popular with many players today, though some think there's too much emphasis on shooting the Magician's Trunk. Pinball fans often get into heated arguments when comparing it to Pinball Magic; Theatre fans praise its non-linear gameplay, fast action, and player-friendly rules and design.

A digital version of the game was formerly available as part of FarSight Studios' The Pinball Arcade collection until their license to all Williams and Bally tables expired on July 1, 2018. Another digital version is currently available for Pinball FX3, along with a remastered version that includes the typical Zen Studios flair.

"The next performance is about to begin!" "Shoot for the magic Tropes!"