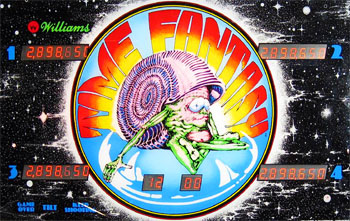 The only pinball endorsed by H.R. Pufnstuf
Advertisement:

Time Fantasy is an arcade pinball game from Williams Electronics. It was designed by Barry Oursler and illustrated by Seamus McLaughlin.

The game came about when, in early 1983, Williams management needed a pinball game that could begin manufacturing in three weeks to prevent a factory shutdown. Furthermore, distributors wanted a low-cost game for family centers where the play time could be easily managed. Oursler and his team completed Time Fantasy in two weeks, a time-based game designed around low-budget components and leftover pieces from other titles.

Time Fantasy is reknown for its psychedelic fantasy theme, which has an anthropromorphic snail-like creature meditating contemplatively among a field of mushrooms in a surreal rainbow-colored landscape. Along with hitting targets and bumpers for points, the player can activate Time Ball for a temporary period of invincibility, then make specific shots to further extend that. For big points, make the Mushroom Jump horseshoe loop, but don't jump backwards or you'll lose points instead!

Only 600 Time Fantasy games were made, but its unorthodox rules and mind-bending theme causes it to get overlooked by many players. It has a small but devoted fanbase, however, who find it a refreshing change of pace from the usual pinball fare. If nothing else, this is a very memorable game for all sorts of reasons.