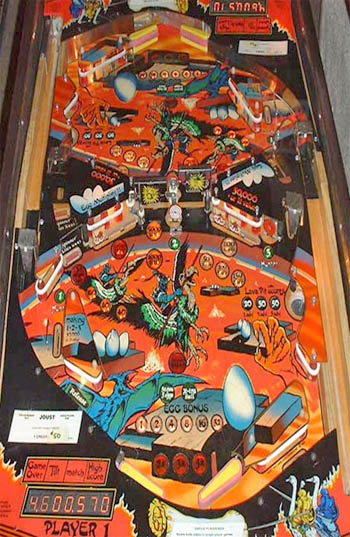 One on one, or all for one?
Advertisement:

Joust is a 1983 arcade pinball machine by Williams Electronics. Designed by Barry Oursler, it is a Pinball Spin-Off of Williams' popular Joust video game.

Unlike a conventional pinball game, Joust comes in a sit-down "cocktail" game cabinet. The playfield is divided into two symmetrical fields facing each other, with identical drop targets, bumpers, and flippers. The player at each end of the cabinet can score points by hitting the targets on their side; doing so will also reset the targets on the other side. As a result, the players repeatedly impede each other throughout the game. Players can also shoot the ball over to the other side and try to induce a drain on the opponent, but a poor shot will let your opponent use your ball for more chances to score. After both players have drained all of their balls, the game will provide 30 seconds of unlimited ball play for a last-chance scoring opportunity. The game can also be played by a single player controlling both sets of flippers simultaneously.

Only 402 units of the game were made, making it a genuine collector's item.