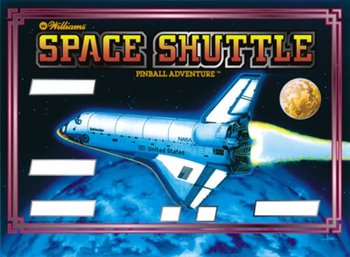 Space Shuttle is a Physical Pinball Table released by Williams Electronics in 1984. It was designed by Barry Oursler and Joe Kaminkow, with artwork by Mark Sprenger and software by Larry DeMar.

The game casts the player as a member of the NASA Space Shuttle crew, participating in a mission to an orbiting space station. Hit the dropdown target in front of the Shuttle for entry, then shoot the ball up the ramp to get the current Stop & Score value. Hit the right ramp to change the Liftoff bonus, then spell SHUTTLE to collect it. For more points, dock pinballs into the saucers on either side of the playfield, open the Airlock, raise the Heat Shield, then enter the Shuttle for multiball.

Space Shuttle is noteworthy for being the first pinball game with a playfield toy, a scale model of the Shuttle licensed from NASA. This was an attention-grabbing extravagance at the time, as the pinball industry was releasing simpler titles to counter declining sales from the rising popularity of Video Games. The game's fast action and theme rode the public's excitement for the Real Life Shuttle to become the best-selling pinball of 1984 by far, with over 7,000 units sold. It is credited with saving Williams from near-bankruptcy and renewing public interest in pinball, and is recognized as a classic landmark title today.

In 1987, Williams released Space Station, widely considered to be an unofficial sequel to Space Shuttle. It features a second set of "STATION" spot targets that scores its own independently-cycling value and retains the Stop-N-Score feature while also featuring a mini upper playfield near the pop bumpers and a rotating space station toy used to direct balls towards the locks.

A digital version was available for The Pinball Arcade until the WMS license expired on July 1, 2018. Pinball Hall of Fame: The Williams Collection still features this game on physical discs for consoles.