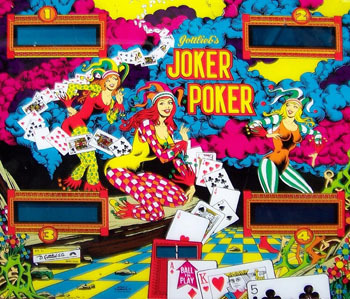 Joker Poker is a Gottlieb pinball machine designed by Ed Krynski and illustrated by Gordon Morison. Released in 1978, it is considered one of the classics of pinball's early solid-state era.

The premise is simple enough — hit the various drop targets to assemble five poker hands of varying strengths, from a single ten up to four aces and a Joker. However, different targets must be hit depending on which ball is in play, testing the player's mastery of the entire board with ever-increasing difficulty. Successfully make the current target bank to light the 5x bonus multiplier, and get the top rollovers for an extra ball.

Joker Poker is a game that's truly easy to learn but hard to master. Ten thousand machines were made; most were solid-state, but 820 were electro-mechanical versions with slightly different art and rules. The solid-state game is lauded by players, while collectors have pushed prices for the EM version into the stratosphere.