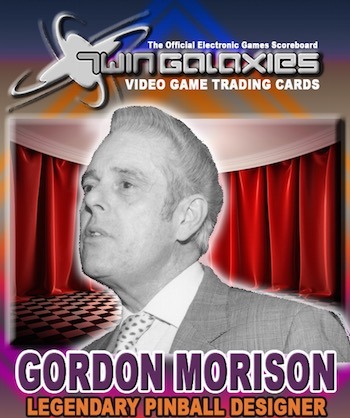 The man who gave the pinball industry a soul.
Advertisement:

Gordon Alexander Morison was an artist and illustrator, best known for his work on Gottlieb pinball machines of The '70s, with nearly 150 games credited to him.

Born in Indiana in April 27, 1930, Gordon Morison joined the US Army and served in the Korean War. After the war, he worked for Advertising Posters Co., creating proposals and illustrations for various clients. At the time, Advertising Posters had a long-running relationship with the Pinball industry, being one of only two art houses that handled all of the playfield and backglass silkscreening for all of the pinball companies since The '50s. It was here that Morison's work was first exposed to the pinball industry, with a bright, pop-art sensibility that meshed well with the techniques of the time.

In 1970, following the death of Gottlieb's longtime artist Roy Parker, Gordon was selected to work on an exclusive basis for them, though he was technically still working for Advertising Posters. Morison was a prolific artist, with a credit of 137 Gottlieb pins, starting with Galaxie in January 1971 up to Asteroid Annie and the Aliens in December 1980.

His instantly recognizable art style married Comic Book pop art with Art Deco's focus on geometry and psychedelic designs, and the high popularity of Gottlieb's pins allowed him to refine a visual language for a generation. Gordon's simple but effective art style was highly flexible for a wide variety of topics, whether it was attractive women, toothy-grinning jesters, futuristic landscapes, or otherworldly environments. He was often quoted as saying that a pinball designer gave the game a personality, but the artist gave it a soul.

After working with Gottlieb for a decade, Morison worked for Stern, although he was not credited for any games there. Although he was an avid runner and marathon enthusiast, he suffered a heart attack in The '80s. Even after recovery, though, Gordon continued to work as a freelance artist and illustrator, including illustrating several issues of the Slimer! and the Real Ghostbusters Comic Book from NOW Comics. Even at the age of 70, friends and family said he'd work up to eighty hours a week, doing anything and everything he could.

Gordon Morison was inducted into the Pinball Hall of Fame in 1998. He died of lung cancer in July 20, 2000, just three weeks after his marriage to his second wife Joan.

Gordon Morison's body of works include:

Gordon Morison and his works demonstrate the following tropes: