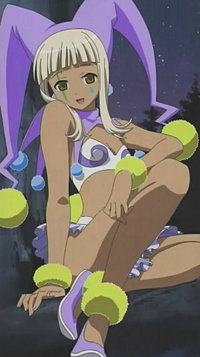 Ooh la la.
Ah, clowns, who likes those creeps? They're either scary as hell, or so silly you can't take them seriously. But what's this? A new character donning motley that's just a little too tight and Stripperiffic? Could this makeup-wearing joker actually be attractive? Might be a Cute Mute if she's a mime. Usually wears a Happy Harlequin Hat.
Advertisement:

Usually a Manic Pixie Dream Girl for the heroes, or a Perky Female Minion for the bad guys. Villainous Harlequin is when a Jester or Clown, who may or not be sexy, plays an antagonist role. Despite the page intro, this can actually apply to clowns as well.