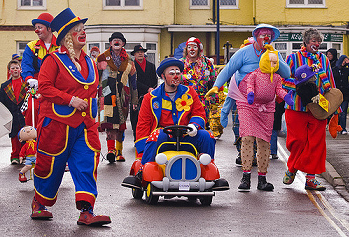 "You know how there's like three clowns? Happy, sad and scary? I'm seeing all of them! Should I laugh, cry or scream?"
—The Mulberry Gallows Project by Adam Marien
Advertisement:

Clowns. They evoke laughter, fun, fear or creepiness. They are the source of so many tropes.