This page contains unmarked spoilers for Watchmen, Darkseid War, DC Rebirth, Superman Reborn and The Button. You Have Been Warned. 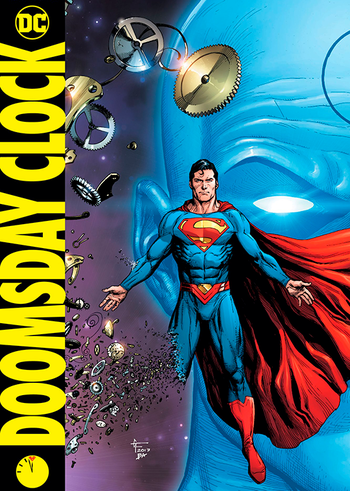 Dr. Manhattan: All those generations of struggle, what purpose did they achieve?
"There are poisons that blind you and poisons that open your eyes."
— August Strindberg
Advertisement:

Doomsday Clock is a twelve issue mini-series by DC Comics, written by Geoff Johns with art by Gary Frank, released in November 2017. This mini-series continues the Watchmen Myth Arc present throughout DC Rebirth in which various heroes have realized that something or someone has changed the DC Universe into its New 52 counterpart. The publisher describes the series as "a story for our time that brings the greatest heroes and villains from the DC Universe together with the mysterious forces from the Watchmen Universe."

After the Justice League's war on Apokolips, the Owlman of Earth-3 gains the Mobius Chair and with it infinite knowledge. On the moon, he and the New God Metron discuss their plans. After asking the chair about the universe's secrets, both are vaporised by an unseen force.

The story truly began in DC Universe: Rebirth #1, when Wally West, the third Flash, returned to the DC Universe after having been removed from its history. Wally appears to various individuals, and warns Barry Allen that someone is watching them and has taken time and relationships from the DCU. Pandora, the woman who initially seemed to be responsible for the New 52, is vaporised. Barry manages to pull Wally out of the Speed Force, and both resolve to find the culprit. Wally's broken watch is shown on Mars, being mysteriously, miraculously repaired.

Abra Kadabra later claims responsibility for casting Wally into the timestream and the world's missing memories of him. Abra Kadabra is shown to be aware of history's alteration, and is fearful of the being responsible. He tries and fails to defeat the Titans, and is thrown into the timestream as a result. His only thought that psychic Lilith Clay could decipher was one word: Manhattan.

People started disappearing soon afterwards — Doomsday, a future Tim Drake (from The New 52: Futures End), Red Robin, Prophecy, even Mr. Mxyzptlk — taken by the mysterious Mr. Oz. Mxyzptlk somehow escaped and, thanks to his antics, helped restore Superman and Lois Lane to their true forms, merging the original and New 52 versions into their true selves. This restored some pre-New 52 DCU history to canon and expanded the New 52's timeline, undoing the previous "five-year" timespan. Mr. Oz notes that this has gained the attention of a being, one seemingly located on Mars.

While investigating the smiley face button that appeared in the Batcave alongside Wally West, Batman is attacked by the pre-New 52 Reverse-Flash, Eobard Thawne, brought back to life by some outside force. After making contact with the button, Thawne is mysteriously teleported away, returning as a smoldering corpse. One giving off unique radiation. Bruce Wayne and Barry Allen track this radiation across time, eventually being saved from falling into the timestream by the original Flash, Jay Garrick. Unlike Wally, Jay is unable to return or have Barry remember him, but tells Barry that someone has taken "everything" from him. The button itself ends up in the hands of a mysterious being, one Thawne described as "God".

Across the world, events continue to escalate: Ray Palmer and Ryan Choi discover that at the heart of a quantum storm in the Microverse threatening reality is a sort of cosmic "bullet hole" where a higher force entered our reality, represented by a gigantic blue hand. Mr. Oz warns Superman and his family that their entire plane of existence is under threat by a force unimaginably, unquestionably beyond their ability to defend themselves against. And a captured foe of the Justice League aware of history's reboots warns Batman that beyond the multiverse or hypertime as they know it, they are puppets on strings in the hands of a being directing the cycle of cosmic death and revision... and that this force seems to be pitted against another bent on the perpetual destruction of these rebirthed continuities, with the conflict reaching a cataclysmic peak.

Now, things are coming to a head with this chapter of the Rebirth saga. It is the ultimate confrontation, between idealism and cynicism. Superman vs. Dr. Manhattan.

Not to be confused with the Doomsday Clock trope from which the series takes its name.