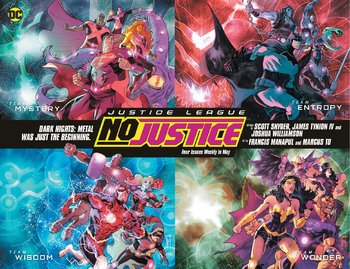 Justice League: No Justice is a DC Comics four part weekly event written by Scott Snyder, James Tynion IV and Joshua Williamson, with art by Francis Manupul. It is set to be a relaunch for the Justice League line.

In the aftermath of Dark Nights: Metal, the Justice League battles with Brainiac, only for him to reveal that he's come to warn them of a greater threat, four giant elemental beings that devour planets, and wants to forge an alliance to save his homeworld, Colu. Forced to team up with some of their long time foes, the heroes are pushed into a battle, not just for an alien world, but the fate of the DC universe itself.