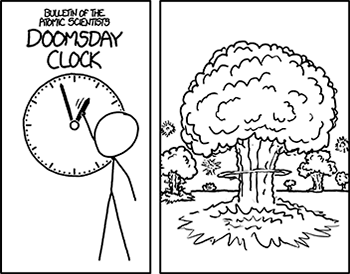 Yet another reason to get rid of Daylight Savings Time.
"Please don't stop it's lonely at the top
These lonely days when will they ever stop?
This doomsday clock ticking in my heart"
— The Smashing Pumpkins, "Doomsday Clock"
Advertisement:

This handy metaphor is pulled out of the writer's bag of tricks whenever we need to be shown that time is of the essence in a particular dilemma. It is almost as good as a Magic Countdown for getting across the message that time is running out. Expect the minute hand to be mighty close to the 12 at the top of the clock.

The Bulletin of the Atomic Scientists

at the University of Chicago actually keep one as a prop... of DOOM! When it was originally introduced in 1947 the clock symbolized how close the world was to nuclear war, with the metaphor supporting it being: talks have broken down, and once midnight hits, the attacks start. And we are all DOOMED. Since the fall of the Iron Curtain, the original metaphor is (supposedly) obsolete, and it was expanded to catastrophic destruction of any sort, provided it's on a global scale. The Bulletin's website specifically mentions Global Warming and bio-engineering as possible causes of DOOM in addition to nuclear war; however, given they can never go a year without also mentioning "global nuclear weapons modernizations" it's most probable that the simple existence of nukes remains a big Author Tract for the Bulletin.

It's also worth noting that the Bulletin evaluates every January every year to discuss whether events in the previous year warrant bring the minute hand closer to midnight, move it farther away, or keep it at the same time.

That said, in the 75 years that the clock has existed, the furthest it's ever been till midnight (1991, after the end of the Cold War) was 11:43PM, so keeping track of it can cause people to think “Too Bleak, Stopped Caring”: if it's always so close to potential doomsday that WWIII could erupt in the time it takes to drive into town on a routine errand, why bother get worked up about the precise location of the minute hand?

This is a subtrope of When the Clock Strikes Twelve. It may overlap with Timed Mission. Also see Death's Hourglass. For the DC Comics mini-series crossing over with Watchmen, click here or the "Comic Book" icon above.