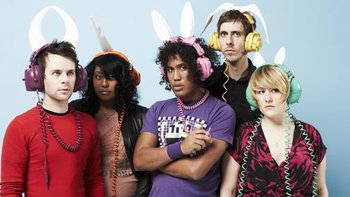 Black Kids are an American Indie Rock band. Formed in 2006 in Jacksonville, Florida, they came into prominence after a very successful performance at the Athens Popfest in Athens, Georgia in August 2007. On the same month, they released their demo EP, titled "Wizards of Ahhhs", for free on their MySpace page. The following year, the band released their first studio album, "Partie Traumatic", which debuted at #5 in the UK charts.

Then they spent the next 8 years silently working and re-working their next album. Said album, titled "Rookie", finally saw the light of day in February 2017 when the band released it on the online platform Bandcamp. Their official website can be found here