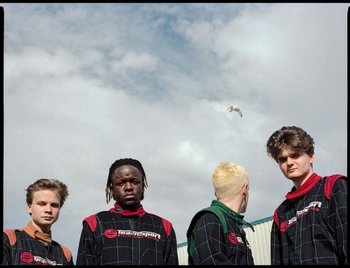 Black Midi is a weird band from London. Though they're named after an infamously noisy genre of electronic music, they are in fact a Genre-Busting rock act. Their complex sound blends elements of noise rock, math rock, Post-Punk, Post-Rock, progressive rock, jazz and no wave into a cohesive but undefinable whole, marked by off-kilter grooves, improvisational jamming, and frontman Geordie Greep's bizarre vocals.

The members of Black Midi all met each other at various jam sessions while they were attending the BRIT School in London together. They first came to wide attention in November 2018, when they performed several then untitled songs at a festival in Iceland. The set was uploaded to YouTube and gained attention across the internet, building hype for their debut LP. After releasing a live album with Damo Suzuki of Can, as well as two non-album singles, "Talking Heads" and "Crow's Perch", that album, called Schlagenheim, was released to widespread acclaim.

In 2021, they announced their second full length Cavalcade, heralded by the single "John L". The album adds saxophonist Kaidi Akinnibi and keyboardist Seth Evans to the band's lineup. It released May 28th.

Work began on a third LP almost immediately, with multiple songs being debuted live. On May 9th, 2022, they announced their third full length album Hellfire, and released a video for the opening track "Welcome to Hell

" on July 12th. The full album dropped on July 15th, and again received favorable reviews across the board.

She moves with a purpose: