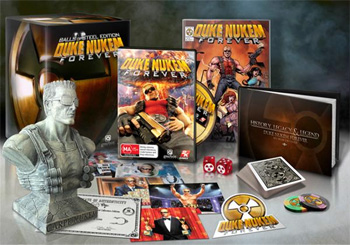 You'd think this would be the normal edition after 16 years.note Pictured: A comic book, a bust of the title character, a certificate of authenticity, a pair of dice, a miniature deck of cards, poker chips, postcards, "foldable paper craft", a sticker, a hardcover book of art, the box it all came in, and last, but definitely not the least, the game itself.
"Limited to the number they can sell."
— Jerry Seinfeld
Advertisement:

Works are sometimes released in two versions: the Vanilla Edition, and a better, souped-up Ace Custom edition with exclusive Bonus Material. With movies, you can expect deleted scenes, filmmaker interviews, never-before-seen footage, commentary tracks and so forth. Video games tend to offer a shiny metal case, developer artwork, bonus characters or the Strategy Guide. Newspapers might have supplementary articles based on national events, like elections or notable sports (Olympics being held in the country? Expect a lot of press!). Concept art, a "making-of" featurette, background story information, character biographies, alternate endings and trinkets are common with any media. All yours, if you pay some extra money.

Worth it? Depends on the individual work, and who you ask. In any case, this is a good marketing strategy, because it feeds into many people's compulsion to own the "best" version. It's particularly clever if you can get people to buy the "ordinary" (some more "ordinary" than others) version, discover how cool it is, and then go shell out again for the Limited Special Collector's Ultimate Edition.

Occasionally the souped-up edition is the only edition for the first few months of a new release (or may be received as a Pre-Order Bonus). Conversely, the special edition might not be released until a couple of months after the regular edition to squeeze more money out of die-hard fans.

Another practice is releasing films both separately and in a Boxed Set with sequels. As more sequels come out, more editions with the entire series come out. The box sets traditionally come with extra features. This is also done with TV series — four episodes will be on one DVD. Then another four. Then another four. And finally the whole sixteen episodes of the season in a neat little box set. Done to excess, can become (and sometimes is) an example of Crack is Cheaper.

Just because a product has a "Collector's Edition" or "Limited Edition" printed on it, it doesn't mean it's actually rare, valuable for reselling, or even something actual collectors desire. The comic book industry suffered heavily in the 1990s thanks to a collector bubble, when products like these were mass produced to exploit people who actually believed they would become valuable items in the future—but those so-called "Collector's Editions" are still worth nothing to this day.

Note that, with regard to video games, this should not be confused with an Updated Re-release, because that's when a game is rereleased with brand new content and significant alterations to the gameplay. The Limited Special Collector's Ultimate Edition comes out alongside the regular edition and just adds bonus content separate from the core game.

Remember that Examples Are Not Recent.