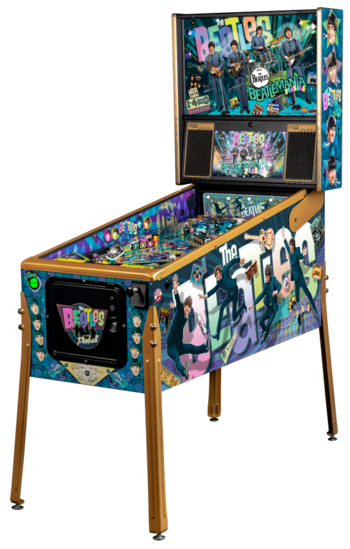 The Beatles (full title: The Beatles Beatlemania) is a pinball machine designed by George Gomez and released by Stern in late 2018.

The game is specifically themed around The Beatles' first foray into America in 1964, and the Beatlemania that gripped the country shortly thereafter. Its '60s aesthetic (including pop art-inspired artwork and simulated electromagnetic reels) fits well with its fairly simple and straightforward rules. In fact, the game's equally simple layout is taken straight from Seawitch (a game from 1980 by the original Stern Electronics), though there are some new features – most prominently a spinning disc in the center (made to resemble a vinyl record).

Not surprisingly, the machine also features nine songs from the band's touring days – "All My Loving", "It Won't Be Long", "A Hard Day's Night", "I Should Have Known Better", "Can't Buy Me Love", "Help!", "Ticket to Ride", "Drive My Car", and "Taxman" – and uses five of them for primary modes. Each of these focuses on one specific aspect of the playfield, including the two spinners, the three drop target banks, and the loop shot encompassing the upper half of the game's layout. Complete all five and you'll be able to achieve "A Hard Day's Night" multiball. Rounding out the package are various clips of the Beatles performing, alongside an introduction from Ed Sullivan and custom-made voice work from Cousin Brucie (the DJ who introduced them at their famous Shea Stadium concert

The game was specifically limited to 1,964 units, coming in three variations: Gold (the least expensive model, of which 1,614 were made), Platinum (limited to 250 units), and Diamond (limited to just 100 units and featuring a mirrored backglass). While all of them feature different artwork, there are no differences between them in terms of gameplay.