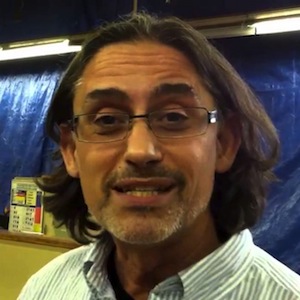 Born in 1955 in Cuba, Gomez emigrated at an early age when his family fled the Castro regime in The '60s. Growing up in the United States, he studied architecture at the University of Illinois in Chicago, but graduated as an industrial designer. He then began working at Bally/Midway in the fall of 1978; his earliest tasks involved designing game controls, most notably the then-iconic joystick for Gorf and the cabinet for TRON. George was soon promoted to game design lead, and his earliest creations include Spy Hunter and Satans Hollow.

However, Gomez became dissatisfied with Bally's management issues and staff layoffs in The '80s, and left the company for Marvin Glass and Associates, a toy design firm. After Marvin Glass was dissolved, Gomez worked as a contract designer for Grand Products, where he helped develop several video games for Sega as well as the Battletech Game Centers.

In 1993, Gomez joined Williams Electronics; though he started on novelty games, he soon moved over as a pinball designer, creating notable tables such as Johnny Mnemonic, Monster Bash, and Revenge from Mars. After Williams exited the pinball industry, he worked as a consultant for Stern Pinball, designing tables like The Lord of the Rings, Batman, Transformers, and The Avengers. In July 2011, he joined Stern full time as Vice President of Game Development.

Video games designed by or engineered by George Gomez include: