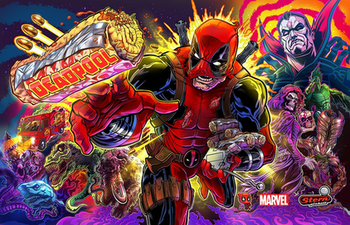 "At least it's not another movie-themed pin!"
Advertisement:

Deadpool is a Physical Pinball Table released by Stern Pinball in mid-2018. It was primarily designed by George Gomez, with artwork by Zombie Yeti (of Ghostbusters) and voiceover work by Nolan North as the title character.

Unsurprisingly based on the famous "merc with a mouth" Deadpool, the player is tasked with helping him fight a trio of villains - Sabretooth, Mystique, and the Juggernaut. Along the way, they can get some help from other Marvel heroes like Wolverine, Colossus, Domino, and Dazzler. There's also "Quest" modes that involve Deadpool traveling back in time to square off against prehistoric beasts. Multiball modes provide an avenue for even more craziness, including Deadpool squaring off against ninjas, dealing with Dracula in a disco nightclub, and fighting Sauron atop a moving train. Finishing these is crucial to the final Wizard Mode, where Deadpool comes to blows with Mister Sinister.

Noteworthy physical features include a ramp shaped like a katana (with a hilt that functions as a locking mechanism) and a bobble-headed "L'il Deadpool" figurine that responds to nearby ball hits and comes with its own set of modes. The Premium and Limited Editions also have a motorized disco ball that starts up during Disco Modes.

Not to be confused with the earlier (and digital) Zen Pinball table. Click here for its trope page.