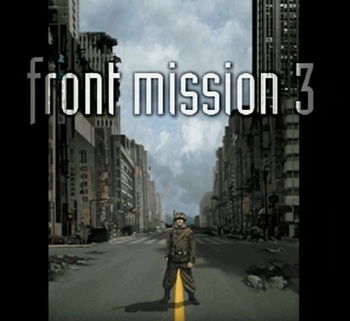 Front Mission 3 is a Real Robot Strategy RPG video game published and developed by Square Enix (back when Squaresoft was around) for the PlayStation console, with a remake set for release on Nintendo Switch. It was first released in Japan on September 2, 1999 with a release in North America on February 20, 2000, followed by Europe (and PAL-affiliated countries) on August 11, 2000. The game is a sequel to Front Mission 2, but has little to no connections to it (same goes with Front Mission).

The story begins in the year 2112, 10 years after the end of the Alordesh coup in the Oceania Cooperative Union (OCU), and takes place in Japan, parts of Southeast Asia and in the People's Republic of Da Han Zhong (parts of China and Taiwan) where players assume the role of Kazuki Takemura, a wanzer test pilot who's tasked to evaluate a new prototype wanzer made by Kirishima Heavy Industries (KHI) in Okinawa alongside his high school friend and fellow test pilot, Ryogo Kusama. After the test, the two are called in to assist with the first delivery of the new wanzers to the Japanese Maritime Defense Forces Base Yokosuka. But upon arrival, an explosion occus inside the base which Kazuki attempts to investigate since his adopted sister Alisa is inside. Later on, they're forced to escape being hunted by the Japanese Defense Forces after being framed as terrorists responsible for the incident. Depending on what choices the player makes, they'll either work alongside DHZ intelligence officer Liu Hei Fong or a United States of the New Continent (USN)-backed commando unit known as Purple Haze, under the Federal Agency of Intelligence (FAI), alongside Emir "Emma" Klamsky, a scientist who has an idea on what's happening in Japan.