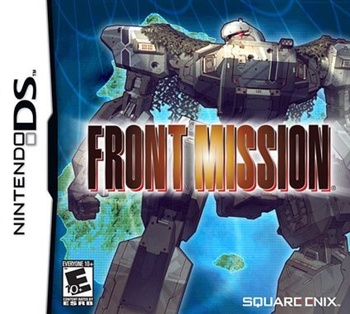 Front Mission 1 is the first game in the Front Mission series by Square Enix (known before as Squaresoft). It was released in Japan via Super Famicom on February 24, 1995 with further releases on Wonderswan on July 12, 2002, the Playstation in October 23, 2003, the Nintendo DS on March 22, 2007 and as a PSOne Classic on November 12, 2008. It was only released officially in English via the DS on October 23, 2007, though another remake on the Nintendo Switch is upcoming in 2022.

It takes place in the year 2090 on Huffman Island, an island created in the Pacific Ocean via volcanic activity in the Ring of Fire in 1995 from the southern direction of the Mexican West Coast. In 2002, HI was classified as an island and the United Nations was involved in mediating its future. But in 2020, the United States of the New Continent (USN) has made plans to annex the island under its sovereignty. The Oceania Cooperative Union has disputed USN claims even before the island was annexed in 2065. The 1st Huffman Conflict in 2070 resulted in the division of the island under both USN/OCU control. An uneasy peace was in place until the Huffman Crisis in 2086. Tensions flare up again and the OCU is accused for being behind the Larcus Incident on June 3, 2090.

Players take control of an OCU soldier named Lloyd Clive. An OCU Army unit is tasked to conduct on the eastern part of HI to check on a USN-managed munitions plant in Larcus District. USN wanzers led by Driscoll opened fire and killed several OCU wanzer pilots including Lloyd's Karen Meure. This resulted in the 2nd Huffman Conflict and blame was placed by the public on Lloyd. Lloyd was later forced to leave with a dishonorable discharge. However, he was secretly sought out by Guri B. Olson, a colonel in the OCU military in order to recruit him to a mercenary group known as the Canyon Crows.

In the PSX/DS remake, a second story arc takes place from the perspective of USN military officer Kevin Greenfieldnote He didn't appear in the original Super Famicom version, who's working under a special forces unit known as the Black Hounds to investigate the activities of a terrorist group known as The Star of Freedom. During the operation, Kevin made a serious error that he's arrested by USN MP officers. Kevin is seconded to HI to work at the Nirvana Institute, which is managed by Driscoll. When the 2nd Huffman Conflict starts, Kevin is recruited to work with the Silver Lynx.

The game would have a sequel in Front Mission 2.

Yoko Shimomura has composed part of the game's OST.