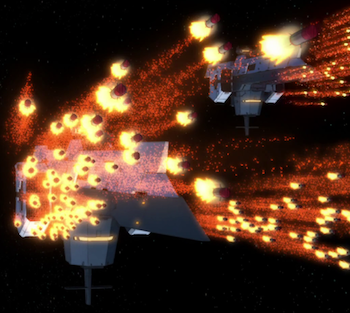 A tactic wherein a military vehicle or craft — often a Humongous Mecha — launches a massive salvo of missiles at a target (sometimes more missiles than you'd think the craft would be able to hold). The missiles often follow artistic curving trajectories for no apparent reason, though strategically it may simply make them more difficult to dodge (or intercept, if there's any usable point defence). Occasionally, this is explained in Space Opera as the effect a ship's energy/force/gravity field has on the missiles. In some cases, this is justified by having the missile silos oriented up (or down) to allow for more surface area-and, in turn, more missiles. If More Dakka is about spamming bullets, then Macross Missile Massacre is the missile equivalent of it.

A High-Speed Missile Dodge is usually an effective counter. A slightly more proactive solution is to launch your own missiles or, if you have the option of More Dakka, shooting them down. Trying to lead them away and crashing into an enemy is usually reserved for Ace Pilots. Can often be rendered into a Worf Barrage. Missiles may engage in Roboteching (which should not be confused with Macross Missile Massacre, even though Macross is part of Robotech).

Named after the Humongous Mecha in the Macross metaseries who fire swarms of missiles (specifically, 'micromissiles') that behave in precisely this way. It has also been called "Itano Circus,"

after animation director Ichiro Itano, who pioneered the most common aesthetic look of the MMM.

There are several actual weapons that fire a Macross Missile Massacre. In fact a whole lot of real-life weapon systems are either designed or can be adapted to use this tactic, and if nothing else you can just gather a whole bunch of one-shot launchers together Hamas or Hezbollah-style; see Real Life examples below.

In fiction (other than Video Games), it will often overlap with a Worf Barrage, especially if it's used against a single target.

A form of Death In All Directions, There Is No Kill Like Overkill, and Impossibly Cool Weapon. May overlap with Fatal Fireworks. If this is fired from another missile in the form of a cluster or multi missile, then it's Recursive Ammo. See also Beam Spam and Magic Missile Storm. See also the related video game genre, Bullet Hell.