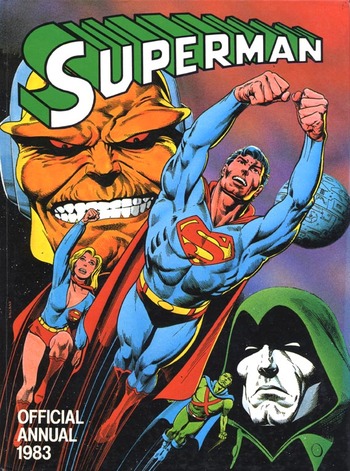 Cover of British edition. Art by Brian Bolland.
They soar through the infinite vastness of space as if it were their natural element — and, perhaps, in a way, it is! For their home was a planet light-years distant from our own — a world destroyed in a shattering paroxysm of pure primal fury. And now the galaxy's two greatest defenders hurtle across the void to prevent their adopted planet Earth — and untold other worlds as well — from suffering a similar terrible fate! Somewhere in the darkness, it is waiting — the most devastating weapon ever conceived... Warworld!
Advertisement:

Warworld is a Superman 1980 story arc published in DC Comics Presents vol 1 issues #27-29, written by Len Wein and illustrated by Jim Starlin. Guest-starring Martian Manhunter, Supergirl and The Spectre, it introduced Mongul and Warworld to the DC Universe.

In The Key That Unlocked Chaos Mongul, an interplanetary conqueror, forces Superman to battle J’onn J’onzz for a Crystal Key that will give him control of Warworld, an artificial weapon-planet.

In "Warworld!", Superman and Supergirl must find and destroy Warworld, a gigantic war machine equipped with weapons which have the power to kill even two Kryptonians.

In Where No Superman Has Gone Before, Supergirl has gone missing after the battle, and Superman has to track her down, wherever she has gone. In order to find his lost cousin, he will have to fly faster and farther than ever before, which will prompt the Spectre's intervention.

This Story Arc was packaged as an Annual in UK, featuring a cover by Brian Bolland. The storyline was reprinted in Showcase Presents: DC Comics Presents Superman Team-Ups Vol. 2.

This three-part story was reviewed jointly in Martian Manhunter: The Idol-Head of Diabolu

Superman: You have taught me a great lesson here — and I won't forget it! Fate has granted us great power — but power for power's sake is utterly worthless! Power is meaningless... until it is tempered with conscience!