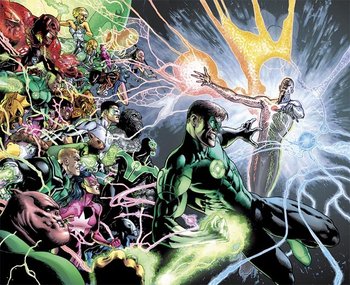 Wrath of the First Lantern is the second Bat Family Crossover of the New 52 Green Lantern, and the final one written by Geoff Johns' run. Also, running from his start to his finish, this serves as a Grand Finale for Johns' work in making and working through the Myth Arc of modern Green Lantern comics since Green Lantern: Rebirth.

Immediately after being freed from captivity by the corrupt Guardians of the Universe, Volthoom, the entity who taught the Guardians about the Emotional Electromagnetic Spectrum to begin with and can manipulate it by himself without a Ring of Power, destroys the Third Army and goes about a plot to attempt to remake reality how he wants it to be, beginning with demoralizing every Corps leader. The ensuing struggle pits every single Corps against the Guardians of the Universe and the First Lantern, including some rejuvenated enemies and allies, and serves to create a new status quo.

Wrath of the First Lantern provides examples of: