Giving Someone the Pointer Finger 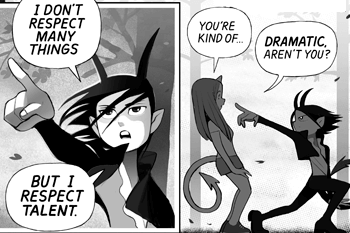 Many cultures in Real Life hold that it's not polite to point. In a lot of western cultures, this stems from a superstition that finger-pointing was how witches would jinx people. Of course, the fact that aggressively thrusting a body part at someone could possibly serve to annoy them probably has something to do with it.

In real-world Japanese society, personal space is at a premium and thus of the utmost importance. One is careful to avoid even the appearance of proximity, and one keeps one's hands at one's sides. Thus, in animeland, it is a gesture of extreme emotional importance to physically point at someone. This should be saved for only the most appropriate of times. If breaking out the pointer finger, it is traditional to be especially dramatic about it. A stylized "swirly" fingerprint symbol on the fingertip is optional. (The polite way of gesturing to somebody is to do it with your whole hand, palm facing up.)

However, most characters who Give the Pointer Finger aren't really doing it in an appropriate situation, which can signify either immaturity or status as a Large Ham.

Often used to denote a new rival or Unknown Rival, although more often than not it is simply the trademark of a hammy character. Also often used in tandem with an "You!" Exclamation.

Compare Sword Pointing, which is similar, but done with melee weapons, and Finger Gun. For more kind of dramatic hand gestures, see Futile Hand Reach and Milking the Giant Cow.