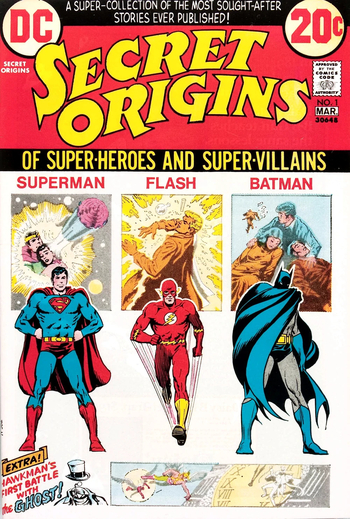 Secret Origins is a DC Comics Anthology Comic series that retells the origins of superheroes.

The original series ran for 7 issues in the 1970s and was all reprints. In the 1980s, following the rebooting of the DC Universe into the Post-Crisis continuity, the title was revived to tell new versions of the characters' origin stories for the new universe, and ran for 50 issues. In the late 1990s, with the launch of the new JLA title by Grant Morrison, the series was relaunched as Secret Files and Origins. Between 1997 and 2010, over 60 one-shots would be published. In the 2010s, DC rebooted the universe again, and the Secret Origins title was revived for a further 11 issues to tell the new origins of the heroes in the New 52.

Notable issues of Secret Origins include: