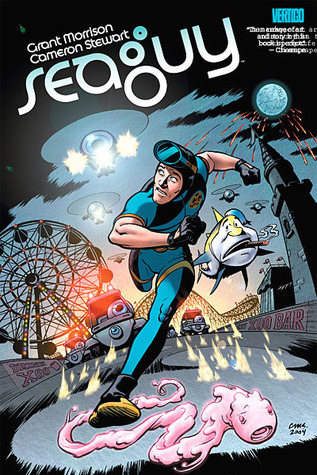 "Perhaps [Seaguy is] too close to reality for some readers, but otherwise, what's not to get?"
— Grant Morrison
Advertisement:

Seaguy, written by Grant Morrison and published by Vertigo Comics (A Darker and Edgier imprint of DC Comics), is a character whose story has been chronicled over two three-issue limited series with a third and final series planned. The first appeared in 2004, the second in 2009. They follow the eponymous Seaguy and his intelligent, flying, cigar-chomping sidekick-fish, Chubby Da Choona.

Umpteen years after the defeat of Anti-Dad, whose death-descent shattered Australia into the thousand islands of Lostralia, and the Heroic Sacrifice of Teknostrich, Seaguy is depressed as he has never had a real adventure, and can never prove himself enough to be a man as to woo his love interest, She-Beard. In an attempt to cheer him up, and to distract Seaguy from the mysterious lumps of rock with hieroglyphics on them that keep on falling from the sky, Chubby suggests they go to the Mickey Eye theme park, which they do. This leads into them finding out about a sinister conspiracy involving a mysterious being called Xoo, Mickey Eye and even the Moon itself!

The storyline is confusing, as with any Morrison work.