Best Her to Bed Her 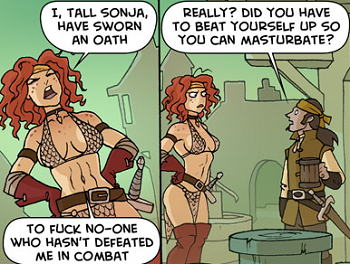 "So, the only man that can have you is one who's already tried to kill you. That's logic."
— Kalidor, Red Sonja
Advertisement:

This trope describes a situation where a woman can or will fall in love only with a man who can conquer her. Her defeat may take place in actual physical combat (this obviously only applies to warrior women), or in any skill or recreational endeavor that the woman is skilled at and takes so seriously that she bases her dating decisions on it, or in a metaphorical sort of battle, giving way once she meets a man who can take charge and show her that he is the one who is making the decisions. In either case, once she is defeated by a man in this capacity, she will surrender her heart and/or body to him.

In other words, Defeat Means Friendship with an instant Relationship Upgrade.

What forbids such a woman from loving a man who can't "master" her varies, but there is always some reason. She may have her own moral code telling her not to choose a mate weaker than herself. It may be an ancient custom or tradition of her people. It may even be religious or magical: there is a curse or blessing on her that will not allow her to submit until she meets the man who demonstrates that he is worthy to have her.

The presence of some rule or custom is what establishes this trope. The woman who falls in love with her opponent after he defeats/stands up to her is not enough to qualify for this trope — there must be a clear injunction that she cannot love any man until he proves his mastery by defeating her.

The Social Darwinist often adheres to this. Compare All Amazons Want Hercules. See also Slap-Slap-Kiss and Darwinist Desire. See also Sex–Face Turn and High-Heel–Face Turn. See also Red Sonja (the page for the former trope namer). Contrast Love at First Punch, which lacks the explicit requirement either by the character themselves or their society.