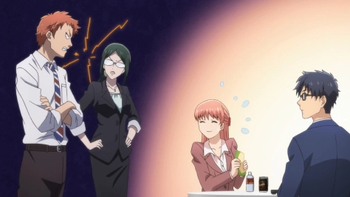 In a work which features more than one couple, usually a main pairing and a beta couple, the writers will try to differentiate the two couples from each other. An easy way to do this is to have one couple bicker constantly while the other gets together easily and are sweetly in love. The main couple can be either type, as long as the beta couple are the other type.

If The Hero gets together with The Chick, expect their relationship to be the peaceful one.

Note that while many fictional couples argue a bit before they get together, this trope is about long-term relationships- the bickering couple will always bicker, even after they're together.

See Slap-Slap-Kiss, Belligerent Sexual Tension and Everyone Can See It for the bickering couple, and Sickeningly Sweethearts or Happily Married for the peaceful couple. Also related to Beta Couple, Official Couple and Pair the Spares, which may happen to the Beta Couple.

Adi and Angel; Bastian and Bee

Adi and Angel; Bastian and Bee