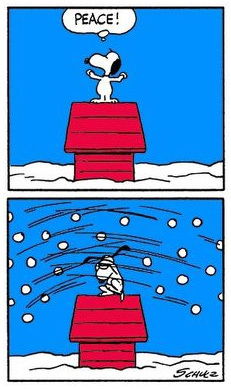 "And just like that, all the hatred they had for each other was instantly directed at me."
— J.D., Scrubs
Advertisement:

Everyone knows when you see two dogs tearing into each other, the last thing you should do is try to get between them. What some don't realise is that the same can be true of people, too.

This trope is when two characters in the middle of a bitter argument make up their differences over a common love of abusing someone else — usually the first person who intervenes to get them to make up. They'll tend to start out with grudging Dumbass Has a Point and Actually Pretty Funny's, before really warming to the tag-team beatdown.

Can cross over with Truth-Telling Session.

It may be the result of the failed efforts of a Third-Party Peacekeeper.

Subtrope of No Good Deed Goes Unpunished, and related to Unwanted Assistance and Contempt Crossfire. Inversion of Apple of Discord, when a third party makes two allies start arguing - this is about making two arguers temporarily join forces against the intruder. Compare/contrast Enemy Mine (when two mortal enemies join forces to defeat a mutual threat) and Genghis Gambit (where the mediator deliberately invokes this). Contrast Reconcile the Bitter Foes and Threatening Mediator (where the belligerents are united in their fear of the mediator).