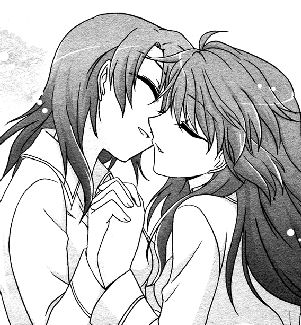 This is pretty much what it's all about.
"I love you. My precious wife..."
Advertisement:

Wife and Wife (Fu~fu) is the tale of Sumi and Kina, a young lesbian couple who have just recently moved in with each other. The manga follows the pair as they make their heartwarming first steps since taking their relationship to the next level... from what they should call each other, to buying their first bed, and everything in between. Billed as "the loving story of a leisurely life together", the series lives up to this promise by remaining surprisingly angst and drama free.

Wife and Wife is a seinen Slice of Life manga written and illustrated by Hisanari Minamoto. The series began its run in 2009 in the Yuri Hime S magazine and concluded in 2013. The manga shows strong influence by Miyabi Fujiedanote In Chapter 9, we discover that Komugi shops at AQ, from the manga of the same name that Minamoto worked on with Fujieda, with whom Minamoto collaborated on a K-On! yuri doujin earlier.

Wife and Wife contains examples of: