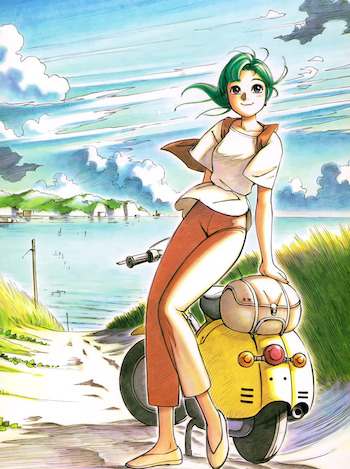 ''The once festive world has gradually wound down.
Allow me to take you through these latter, languid days;
the so-called Age of Evening Calm.
Let us sit on the warm concrete before Night falls.''
Advertisement:

Robot Girl Alpha Hatsuseno runs a cafe outside Yokohama, nearly deserted after a catastrophic flood, implied to have been part of a longer chain of disasters. Soon, another robot comes with a delivery of a camera, beginning... well, not much, really. Don't let her gun fool you; it's a pretty laid-back series. Perhaps very little happens, but then it's not about things happening. This is a manga series that gives you something to think about, and time in which to do it. After all, there's all the time in the world.

Written and illustrated by Hitoshi Ashinano, Yokohama Kaidashi Kikou (Record of a Yokohama Shopping Trip) is a slow, quiet vision of the peaceful decline of humanity. The manga was serialized from 1994 to 2006 in the Seinen magazine Afternoon. It was also adapted into four OVA episodes by Ajia-Do; the first two were released in 1998, and the second two (subtitled as Quiet Country Cafe) were released in December 2002 and March 2003.

A bit of advice: If you try to speed read through the manga, you'll probably find it very boring and pointless. The story is told through the visuals, not the words. Sit back and stare at the artwork.

A French publisher, Meian, is releasing the volumes in French

under the name Escale à Yokohama (Stop at Yokohama). While the manga had no official English translation for many years, Seven Seas Entertainment announced that they licensed the series in 2022

, and are releasing the manga as five omnibus volumes.