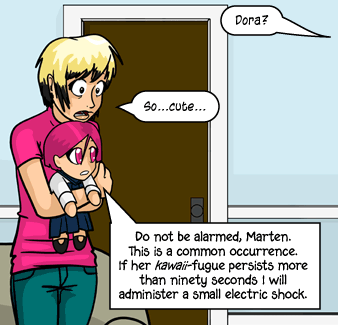 Cuteness Overload is the state in which a character experiences the immense rush of emotion after seeing (or hearing) something very, very cute, often rendering them partly or wholly incapacitated. The sudden charge of feelings could create so effective an incapacitation that they may have to be woken up by another character calling their name or by other means. Depending on the situation, it shares some traits with Heroic BSoD, but the main difference is an exposure to cuteness rather than a traumatic event.

a slang term formed from the words Moe and diabetes

, which has similar traits. This is more for anime and/or manga where someone is exposed to such great amounts of moe cuteness that they end up with constantly high moe levels, similar to how a diabetic has high blood sugar.

Not to be confused with Cuteness Proximity (in fact, that one functions more as a subtrope), since this describes the state the character is in, whereas Cuteness Proximity requires the character suffering from the effects of Cuteness Overload to be within a particular distance from the cute thing — and often the cute thing in question must be a physical being or object. However, the former can obviously result in the latter, and the two tropes often do overlap. It may also result in I'm Taking Her Home with Me!.

Most certainly Truth in Television.