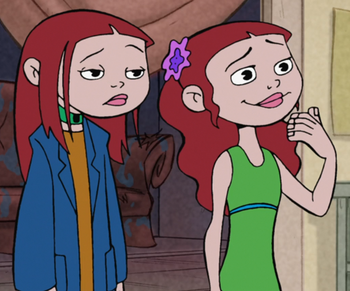 "When me and my sister were little, we had two older twin sisters who would take care of us. We always called one The Angel and one The Devil, because one was really nice and the other was a complete bitch."
— Doopie Do Over, "HORRIBLE THINGS BABYSITTERS DID TO US

A Sub-Trope of the Odd Couple wherein the odd couple are twins, usually identical brothers or sisters (or cousins, as long as they're still using the "identical appearance, contrasting personalities" motif).

Basically, Sibling Yin-Yang for twins, as there is an extra bit of irony when people born at the same time (and who usually look the same as well) are so different. They'll usually embrace using Identical Twin ID Tags to help the differentiation.

Sometimes overlaps with Cain and Abel, in which case you might expect Fearful Symmetry. Also frequently overlaps with Foolish Sibling, Responsible Sibling and Red Oni, Blue Oni. Compare Evil Twin. The extreme opposite is Single-Minded Twins or Creepy Twins.

Patricia and Piper show off their contrasting personalities while preparing for a TwinSwitch.

Patricia and Piper show off their contrasting personalities while preparing for a TwinSwitch.