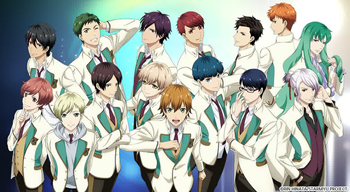 "We don't know how to give up on our dream!"
Advertisement:

The story follows Yuuta Hoshitani, a boy who decides to enroll in a music-oriented high school in hopes of learning how to dance like a mysterious white-haired high school boy he saw in the rain prior to the start of the series. Learning of the special music program, Yuuta auditions and manages to be put into a special group with four other boys; Tooru Nayuki, Kaito Tsukigami, Kakeru Tengenji, and Shuu Kuga. Together, the five of them will go through the struggles of advancing in the music department, under the tutelage of their mysterious white-haired senpai, Itsuki Otori.

Aside from the setting, has nothing to do with High School Musical.

The series currently consists of two seasons, two OVA, and a stage show. Season 2 premiered in the Spring 2017 Anime season. A second stage show and a third OVA were announced for 2018. Season 3 will premiere in 2019, and the third musical will run at the same time. Two spin-off stage musicals have also been performed, with smaller groups from the cast.