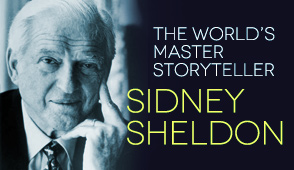 Writer Sidney Sheldon (February 11, 1917 – January 30, 2007), by the time he turned his talents to novels in 1970, had won an Academy Award (for The Bachelor and the Bobby-Soxer) and a Tony Award (for Redhead) and helped create two hit TV shows in The Patty Duke Show and I Dream of Jeannie. Then his career really took off.

While The Naked Face (1970) was well-received, it was 1973's The Other Side of Midnight that was his first blockbuster, setting the tone and style for his subsequent works. His novels were tales of treachery, passion, and love often set among The Beautiful Elite — wealthy industrialists, entertainment icons, gangsters, even heads of state — often spanning years of chessmaster plots and power plays, be they political or corporate. Airport Novel fare all the way, they sold like gangbusters and his publisher came to proudly advertise him as "The World's Master Storyteller." Like those of his contemporaries Harold Robbins, Jackie Collins, and Judith Krantz, his books were hardly regarded as fine art — they were Soap Operas for the page.

Three of Sheldon's first four books, with the exception of A Stranger in the Mirror, were adapted for the big screen, but all proved disappointments — the stories were generally too elaborate for B-movies, but too trashy to work as A-list fare. But the turn of The '80s was the era that the Made-for-TV Movie and Miniseries genres came to prominence, and Sheldon's books were perfect for those formats — eight of his books would be adapted for the small screen over 1983-1995. He also created one more TV series, Hart to Hart, in 1979.

The novels of Sidney Sheldon are:

The novels of Sidney Sheldon include examples of: