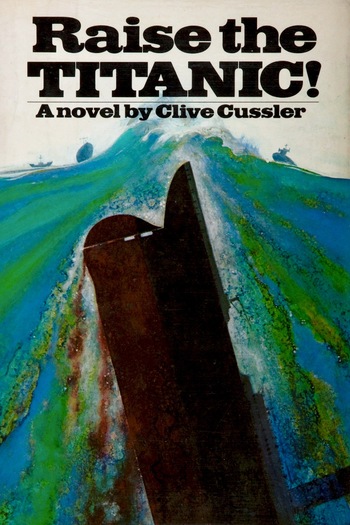 Raise the Titanic! is an early novel by Clive Cussler, the third entry in the Dirk Pitt Adventures series and his first bestseller. It was first published in 1976, a full nine years before the wreck of the RMS Titanic was discovered, and as such, the plot unintentionally takes a few liberties with the plausibility of salvaging the doomed ocean liner (until the wreck was found, most experts assumed it remained intact after sinking rather than breaking in two).

Dr. Gene Seagram, top scientist for a heavily-funded top secret government think tank, designs a defense system that would make it impossible for Russian missiles to hit any target in the continental United States, rendering the ICBM obsolete and shifting the balance of world power decisively in America's favor. Unfortunately the device will only run on some Unobtanium, the only known supply of which went to the bottom of the ocean on April 15th, 1912 during the sinking of the Titanic. There's only one thing to be done...

Unfortunately, the Russians have caught wind of the true motivation behind the Americans' attempt to find and salvage the Titanic, and they're not exactly happy about it. Partly because the ore in question was originally mined in secret from territory that Russia had a claim to at the time, but mostly due to the aforementioned balance of power. They set out to sabotage the operation with the aim of reclaiming the stolen ore, or at least denying possession of it to their enemy.

The book was a notable success, launching Cussler's writing career. There was also a film made which is far more infamous and far less successful. The raising sequence is still worth a look.

One of Cussler's last books, The Titanic Secret (co-authored with Jack Du Brul), serves as a prequel to the story. Years after his adventure on the Titanic, Dirk Pitt is given a journal written by private detective Isaac Bell (hero of several other Cussler books). It gives details on the discovery of the Byzanium and its connection with the Titanic.