Literature / The Wreck of the Hesperus 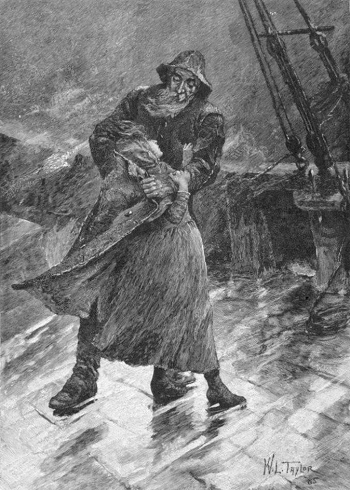 Christ save us all from a death like this,
On the reef of Norman's Woe!
—The narrator, closing lines
Advertisement:

"The Wreck of the Hesperus" is a balladic Narrative Poem by Henry Wadsworth Longfellow that was inspired by the many shipwrecks the coast of Massachusetts suffered in December of 1839 starting the 14th. In his journal entry of December 17, 1839,note Quoted in a letter Longfellow wrote to Charles Lanman in 1871. Longfellow mentions four pieces of inspiration. Those are that as many as forty bodies of shipwreck victims washed ashore at Gloucester, one of which was a woman lashed to some wreckage, that many of these tragedies occurred at Norman's Woe, a nearby rock reef, that among the lost ships there was the Hesperus, and that the Sea-Flower suffered the same fate at Black Rock, an island in Bristol County.

It's been gathered that the woman Longfellow'd read about was the 59-year old captain's widow Sally Hilton, who was on the Favorite when it went under. The wreckage she was tied to was part of a windlass, which suggests accidental entanglement rather than anything purposeful as Longfellow would pen down in the poem. The Hesperus mentioned was not actually wrecked at Norman's Woe, but was damaged while docked in Boston. Another journal entry detailing the night of December 29 to December 30 states that Longfellow wrote most of the poem in those hours in a burst of inspiration. "The Wreck of the Hesperus" was submitted to The New World and published on January 11, 1840. In 1842, Longfellow included the poem in his own Ballads and Other Poems.

In "The Wreck of the Hesperus", an unnamed skipper brings his little daughter along on a trip. Despite the concern for her safety that should make him extra careful, the skipper arrogantly refuses to sail the Hesperus into a nearby port when an aged sailor warns him that a storm is approaching. As the wind picks up and the temperature drops, the skipper's daughter becomes scared. To calm her, the skipper gives her his coat for warmth and ties her to the mast so she can safely stay with him. Then he freezes to death at the wheel. All the girl can do is pray as the rest of the crew is swept overboard by the waves, but it doesn't do her any good. The next day, her corpse is found by a fisherman. She's covered in frost and salt and still tied to the mast.

The poem has been adapted twice into a film by the same name, once in 1927 and once in 1948. Beyond that it was the basis of a Mighty Mouse short in 1944, it inspired several songs and one band name, a now defunct ride was named after it, and a street parallel to the coast at Norman's Woe is named Hesperus Avenue.

"The Wreck of the Hesperus" provides examples of the following tropes: