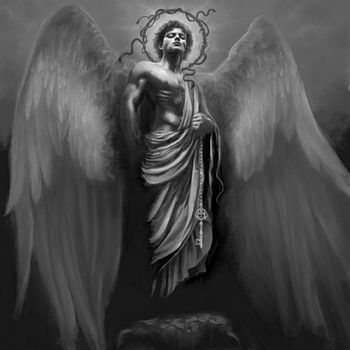 "I will ascend to heaven; I will raise my throne above the stars of God." So, how'd that gig work out, Lucifer?
—Image by Caelicorn
"Pride goes before destruction, a haughty spirit before a fall."
— Proverbs 16:18, New International Version
Advertisement:

Pride. It goeth before a fall.

Sometimes having a good opinion of yourself — your position, your skills, your accomplishments — can be too much. It can go to your head. It can turn you into a Jerkass. When it really gets bad, it can destroy your common sense, make you delusional, declare to the world that "It's All About Me!" and make you grab the Idiot Ball by Tempting Fate.

Many religions, such as that of the Greeks (who coined the terms Hubris and Narcissism for such dangerous amounts of pride) were condemning on having a mortal (un)deservedly boasting that they're better at something than their highly petty and vengeful gods, especially the one who declares oneself Above the Most High. Or trying to constantly bully the weirdo who has the powers to reduce you into a smear on the wall, because your pride says you can. Or (always a classic) walking right into an enemy's hands confident they'll fall just like everyone else has, despite how they seem to be goading you to stand on the big red bulls-eye.

Or, best of all, never asking for help or Forgiveness despite all the Break the Haughty because "pride" won't allow it... or, if you are helped you express lack of gratitude, and letting highly preventable events play out, to the pain and misfortune of protagonists and their close ones, if not others. In more Romanticist works, hubris also goes very well with committing, through science, sins against nature or discovering Things Man Was Not Meant to Know.

How the Mighty Have Fallen! The technical term for that is "Tragedy." When done on a larger scale upon entire civilizations, leads to Look on My Works, Ye Mighty, and Despair or And Man Grew Proud.

Pride forms a powerful combination with Ambition, Greed, Megalomania and Insanity, and these deadly sins have brought down more heroes and villains than Homer could shake a cudgel at; just see the many victims of the Villain Ball and its subtropes. As a Fatal Flaw and Achilles' Heel, it is a classic that's Older Than Feudalism and not likely to go away any time soon. There's a reason why this is one (and also the worst) of the Seven Deadly Sins, and why a very minor character in Classical Mythology is the Trope Namer for Narcissistic Personality Disorder.

Pride is a potent driving force for Drama: Some stories begin with the proud brought low and their attempts to learn humility, others are driven by prideful quests, while others end because of an unwillingness to forsake said pride.

It's All About Me, A God Am I, Kneel Before Zod, Nothing Can Stop Us Now!, What Could Possibly Go Wrong?, Grudging "Thank You" and Don't You Dare Pity Me! are proud stock phrases. Proud people are also very likely to suffer from Moral Myopia (to the point of being convinced to be the only righteous one). Come to Gawk is frequently uncommonly painful for the proud — and the proud are uncommonly likely to jump to the conclusion that someone did come to do just that. The Green-Eyed Monster often accuses the envied person of Pride — justly or unjustly, or the person with Pride could be the one getting envious. Sub-Tropes include Acquired Situational Narcissism, Fairest of Them All, Holier Than Thou, Inferiority Superiority Complex, Never My Fault, Smug Snake, and Too Clever by Half. See also Small Name, Big Ego and Fallen Angel.

Not to Be Confused with the common use of "pride" to denote a group of lions, or LGBT Pride — in the latter's case, despite what some may claim, the concepts are unrelated, and most non-English languages have separate words for this kind of pride versus pride in being who you are.