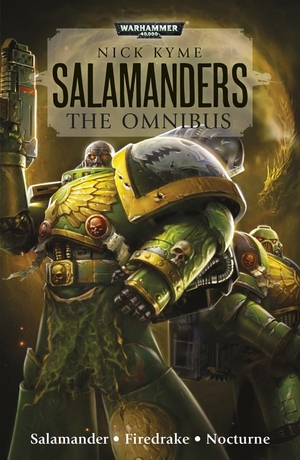 "Into the fires of battle! Unto the anvil of war!"
Advertisement:

The Salamanders are a chapter of Imperial Space Marines in the Warhammer 40,000 universe and as such, should not be confused with Alchemic Elementals (or, you know, slimy, lizard-like amphibians).

They are the subject of Nick Kyme's Tome Of Fire trilogy, comprising Salamander, Firedrake and Nocturne.

Following a disastrous campaign on the planet Stratos (see the short story `Fires of War' in the Heroes of the Space Marines book for details) the Salamanders 3rd Company is still reeling from the loss of their captain and the internal politics of the company isn't helping in the least. When the company uncovers a relic from the past that could lead to information on their missing Primarch they embark on a mission that could either heal their troubles or make them worse.

When Chaplain Elysius of the Salamanders is taken captive by Dark Eldar, he faces a fight for survival at the hands of these cruel aliens. The Firedrakes of 1st Company attempt a daring rescue mission, but much more is at stake than the Chaplain's life. He holds the key to secrets buried beneath Mount Deathfire, secrets that could reveal the damnation - or salvation - of their home world. The Salamanders must penetrate the Port of Anguish and defeat the xenos threat there if they are to unveil the mysteries within the Tome of Fire. Meanwhile, Dak'ir battles to survive the brutal Librarian training, and in his visions lies an even darker future.

Finally, in Nocturne, the Salamanders face a treacherous attack on their own homeworld.

An omnibus edition, Salamanders, was released in 2013, containing the Tome of Fire trilogy and a number of short stories set before, during, and after the trilogy.

Please resist the urge to put examples on this page or link to this page on tropes unless you are citing from 40K novels in which the Salamanders feature. Examples which are specific to rulebooks or other in-universe fluff should go on either the 40K page or in the Space Marines section of the Imperial factions page.

Please check out the character sheet

Tropes associated with this chapter and the novel include: